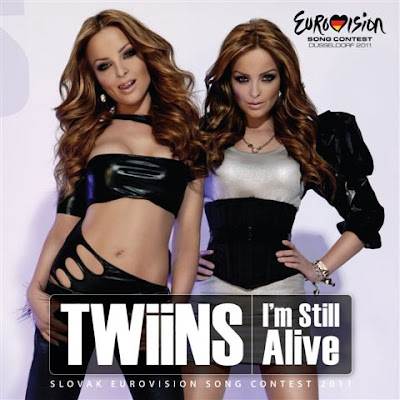 After a lot of will they, won't they it's clear that Slovakia are in this year.
They have selected Twiins, twin sisters Daniela en Veronika Nízlová, with the song I'm Still Alive.

The song is written by Braňo Jančich, Bryan Todd and Sandra Nordstrom.
Jančich produced last years entry Horehronie, Bryan Todd produced wrote for Miley Cyrus, Jordan Sparks and the Pussycat Dolls.
Sandra Nordstrom worked with RedOne and Max Martin and is the demo singer for many of their international hits.
You can listen to the song at the Twiins Youtube channel.
The song was presented on March 5 at the Slovak Miss Universe competition.

Charity version
A remake of I'm Still Alive with Zimbabwan rapper MetaPhysics is recorded. Proceeds of this track will go to the victims of the Japan earthquake and tsunami.
The track will be released but is not on the Twiins cdsingle. (So far it hasn't been released anywhere, so I don't think there will be any penny for charity)
Check this version out here at Gandanga.

Check out all the entries of Düsseldorf 2011